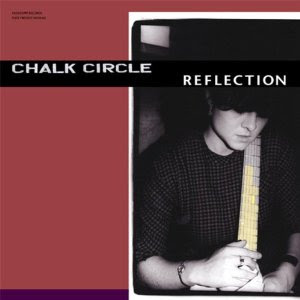 It's surprising to learn that Chalk Circle were a part of the Washington DC Punk/Hardcore scene, given their euro-centric sound and that the group was ruled by girls. Formed through connections Sharon Cheslow made working at Yesterday and Today records in 1979, a hub for kids to hang out at the time, an early incarnation of the band included fellow vocalist/guitarist Ann Bonafede, Cheryl Celso (who won the lead singer slot over Henry Garfield) and Bert Quieroz from The Untouchables filling in on bass. It was Cheslow who thought up the name Chalk Circle based on Bertolt Brecht’s book “Caucasian Chalk Circle”.

The Washington DC music scene was governed by men, Chalk Circle experienced how palpable this was at the Unheard Music Festival in 1980 debuting the areas new hardcore bands, none of which featured girls. It was at this time Cheryl left the group and by March 1981 Chalk Circle was an all female affair with; Mary Green (vocals/guitar), Sharon Cheslow (vocals/guitar), Jan Pumphrey (bass), and Anne Bonafede (drums). In 1981 Tamera Edminster would become permanent bassist until moving to New York and forming SHE a year later, with Chris Niblack taking her place before the band called it a day in 1983.

Mississippi Records has compiled twelve songs culled from Outside Records and WGNS compilations, live recordings and unreleased works. Chalk Circles vocals flip from sedated to spry alongside heady bass, swarming guitars with amphetamine rhythms behind the driving force of the songs. "The Look" is a rejection of the rat race, utilizing sound effects of a clanking hammer intermittently personifies the monotony of the daily grind and Chalk Circle's rebellion against it. "High Stress" is a highlight on the album perfectly capturing how their songs run with a caffeine rush pulse.

Accompanied by a 16 page booklet put together by Sharon Cheslow shedding light on Chalk Circle's history along with photos, press clippings and liner notes from Don Fleming, whose group Velvet Monkeys, Chalk Circle opened for on their first few shows. With the resurgence of Post Punk at the moment this reissue has come out at the perfect time. What makes this worth your while is the unexpected place this music comes from. They didn't fit in to the humdrum of daily life nor the mold set by piers in their own music scene, making Chalk Circle one of a kind truly outsider band.

A UK based music blog focused on DIY, Alternative Rock, Indie, Folk and a few other things too.